2 months ago, I got to try out the demo for Balsa Model Flight Simulator and had a pretty fun time. (check out the first impressions piece for the demo here!) This time, I got to play around with the more feature-rich beta. Here are my thoughts on the content and some things I would like to see going forward.

The start screen that shows all of the game modes

One thing that immediately caught my eye was the addition of 3 more maps to fly around in: Glider's Cay is a small island with a large hill that's perfect for testing glider designs; Wirraway Bay was in the demo, and has a nice urban port surrounded by some mountains; Weatherfall Islands is a wide-open arctic map with some neat icebergs; and Rovin Harbor is a large city which allows for some challenging urban flying. I personally liked Weatherfall Islands since it feels vast and some of the icebergs have natural arches/holes to fly through and do stunts around. I appreciated the variety in the landscapes and scenery in these maps and hope to see more in the future. 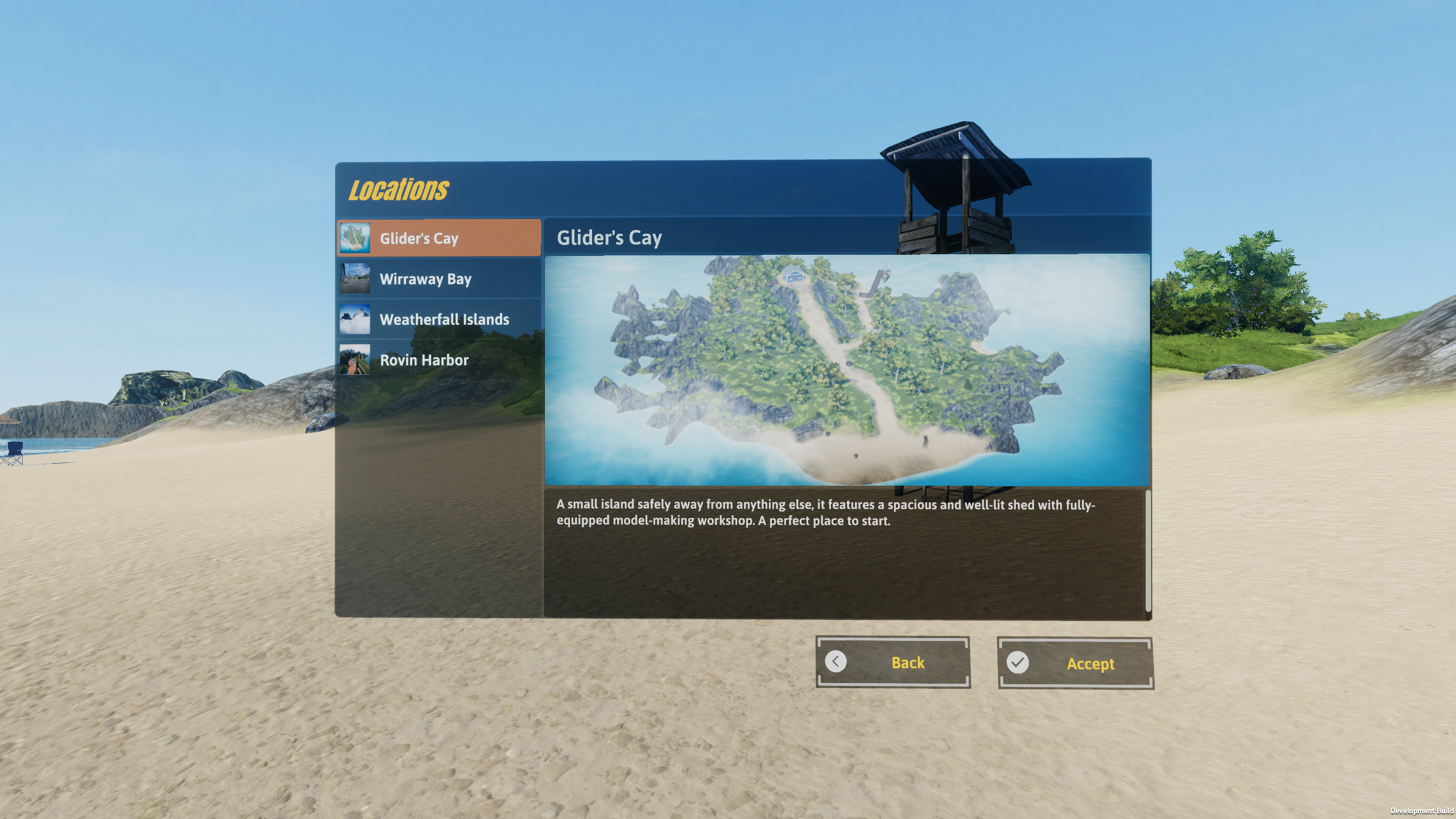 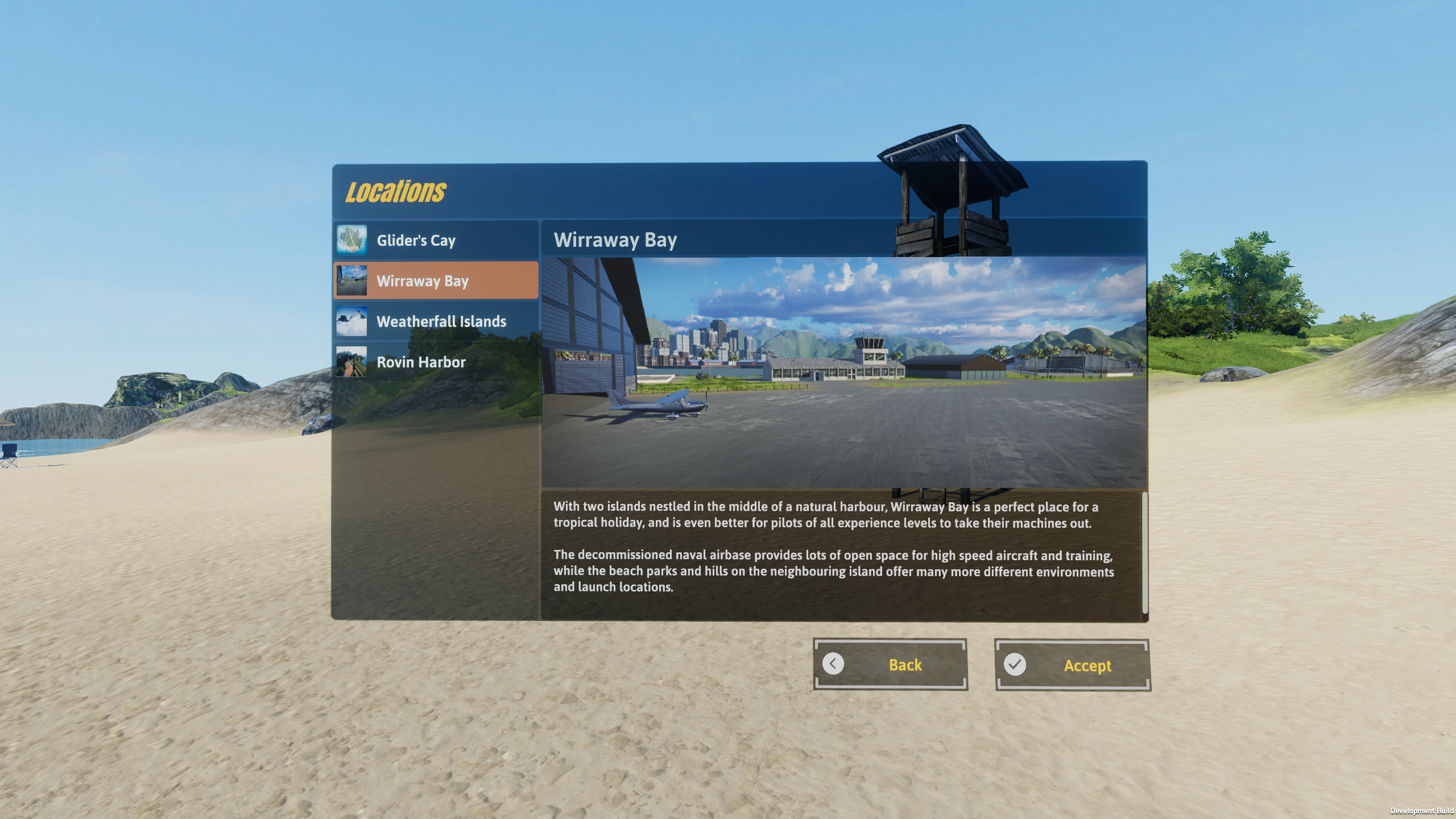 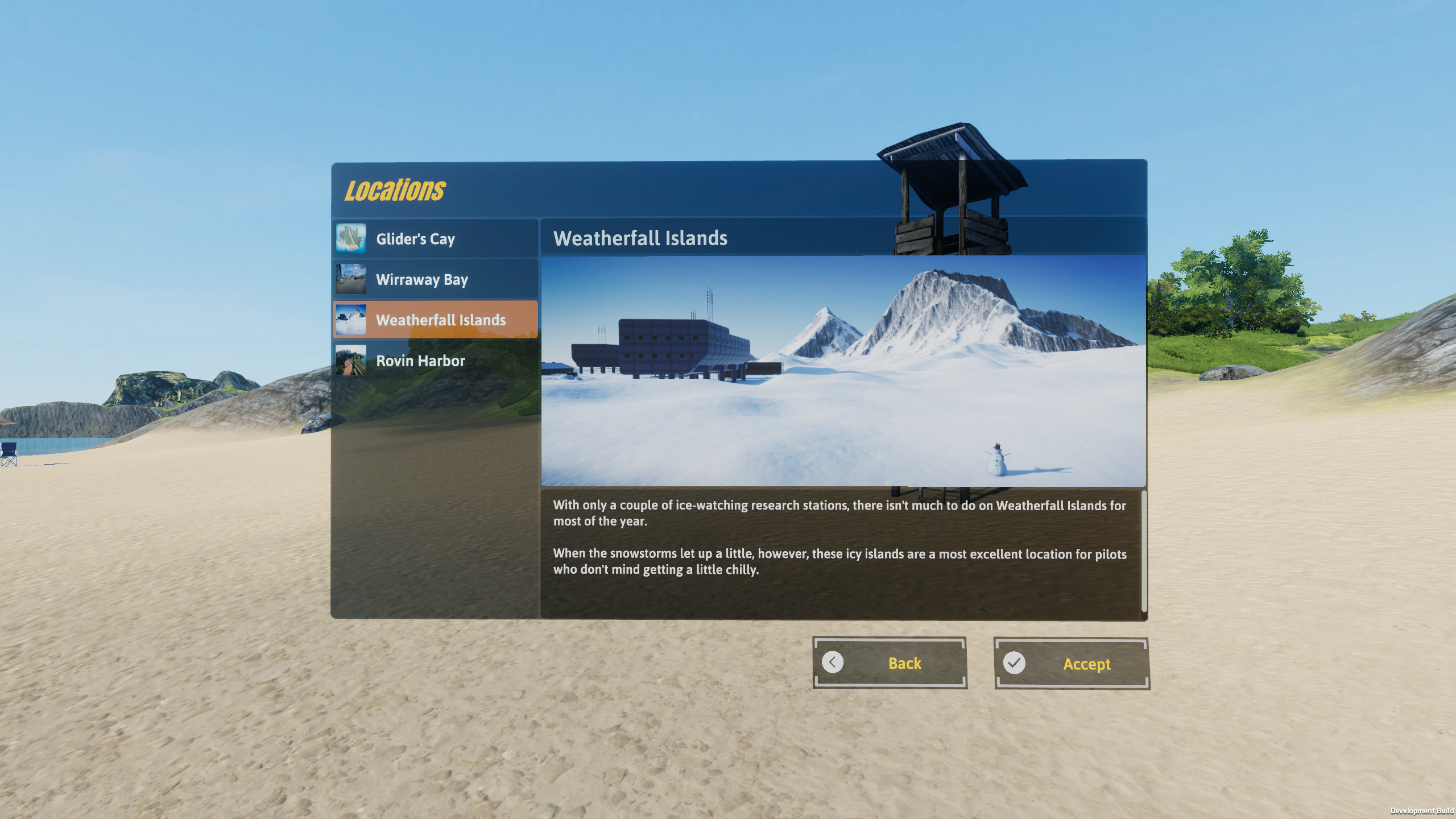 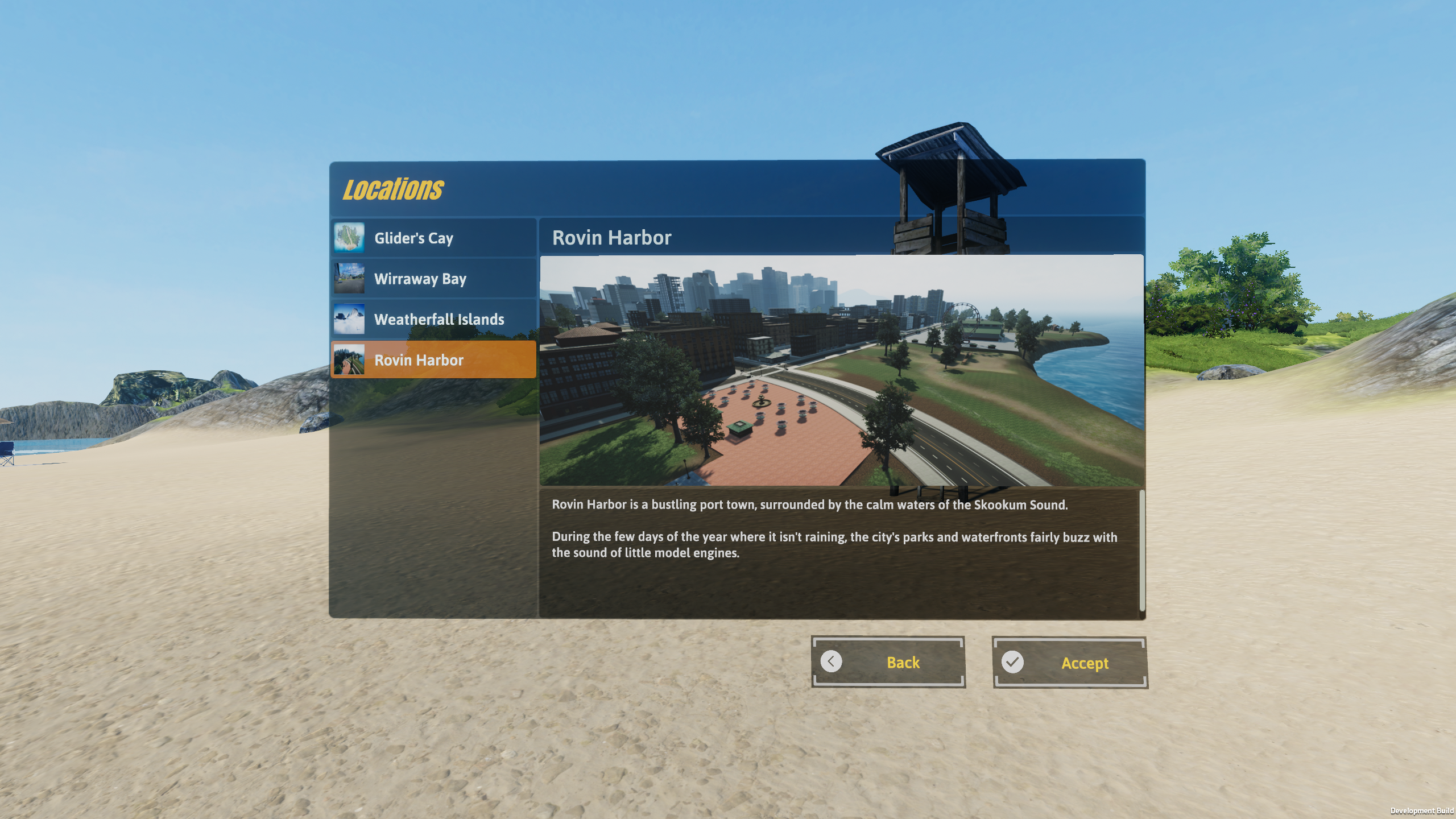 Another new feature was the addition of action figures. I think these are meant to be collectibles that are unlocked in the Career Mode, but they are available for any scenario. Though they look really cartoon-ish, you can add them to your plane (as long as you added seats) to give a sense of scale for your plane and really bring your creations to life. I think the best feature of these action figures is that they allow you to fly your plane in first person view.

You can add action figures by clicking and dragging them to an open seat.
Flying in first person in my F-5!

Since there are small cameras and FPV goggle kits that people add to their RC planes in real life, I think this is a really neat feature, and is especially useful for dogfighting. Also as a nice touch, the player model sports FPV goggles whenever an action figure is added to the plane.

Speaking of dogfighting, there beta officially added parts for weapons. Well, they're paintball guns, but they're pretty satisfying to fire. There are two types of guns so far, the hard-hitting "Thud" cannon and the fast-firing "Hailstorm" that deals less damage. Each pod has 58 and 240 rounds respectively, and though the "Hailstorm" is technically weaker, I prefer it over the "Thud" since that fast fire rate allows for more hits against nimble RC planes. Learn to aim it well and it can deal critical damage to enemies. 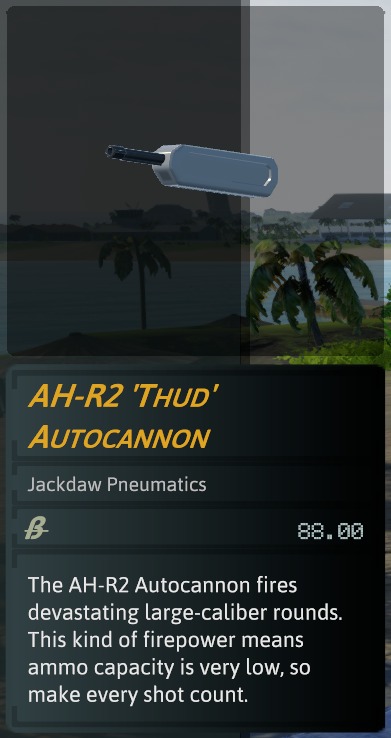 Just be aware that these pods are pretty heavy, and will affect the center of mass and performance of your plane. The game also allows you to create weapon groups, so in case your plane can carry both kinds of guns, you could map your keys in a way that allows you to fire the different gun pods separately or together. Interestingly enough, you can place these pods so that they're entirely hidden inside your aircraft and still be able to shoot paintballs, almost as if they phase through your airplane. Not sure if this is a bug, but it's something that I personally think the game should keep as is, since it allows your aircraft to look cleaner.

You can place the gunpod completely inside the plane!

Now, if there were some targets to shoot at...

Thankfully, there are some new "Scenarios" added in addition to the free flight mode for each map, and these are "Free for All," "PvE Combat," and "Team PvP Combat." In these modes, the map is populated by AI planes that you can use as target practice. For the combat modes, you choose a team and attempt to shoot down enemy planes. If the enemy crashes or gets shot down, they lose a point, and vice versa. The team that reaches zero first is then defeated. Since I couldn't find people online, I didn't really play the PvP mode that much, but it seemed identical to the PvE mode except that actual players can join the enemy team. I didn't play long enough to see what the ultimate result screen looks like, but you can have some good fun and learn how to aim the guns. In terms of on-screen information, a reticle is displayed in front of your plane in third person view if you have guns installed, but for first person, you'll need to equip the gun reticle part in the cockpit. Enemies also have brackets around them that makes spotting easier, and the plane name and their distance away from you are displayed as well. All in all, these are some pretty fun, laid-back modes.

There were two new modes added to the beta:

The online mode allows players to host lobbies for up to 16 people, though you can limit the maximum amount of players when setting up a room. The game also allows you to name and add descriptions to rooms so people know what to expect. I would've liked to test for any connection issues, but sadly no one was on when I was playing around.

The career mode will be the bread and butter of the single player aspect of the game, and also serves as a tutorial.

You start off in Glider's Cay and learn how to move around, pick up your glider, and throw it. As you get more used to the controls, the various events and missions ramp up in difficulty as you learn to pilot powered planes and practice taking off and landing on a runway.

Each event also has optional objectives that allow you to get higher ranks. This nets you more "funds" which are used as in-game currency to buy planes, action figures, and unlock new maps which will let you fly in more events. This cycle of flying, getting funds, creating/buying more capable planes, and flying in even more challenging missions is really fun, and the sense of progression you get is pretty satisfying. I wasn't able to progress too far the career mode, but I'm excited to see what they will add in the future. One thing that I think would be a cool addition is monthly limited-time events or challenges when the game goes live to keep players coming back. I hear a race mode will be added down the line, so I'm excited for that.

Each map has its own set of events/missions
Landings are optional for the early missions, but you can get a higher rank if you do so
Use your funds to unlock more maps and events!

One thing to note, all parts are available for you to use when creating planes in the workshop and making the planes themselves are free. However, in order to be able to fly them, you will need to purchase the aircraft. Be aware the more complicated/more parts your plane has, the more funds you will need to be able to buy it. Each part has an associated cost that is listed when you're building, so keep your eye on that. You can go back and edit vehicles that you have already purchased, but be aware that if you add more parts, the cost will increase.

Now let's see if there were any changes to the other core aspects of the game.

The one thing I really wanted from the demo was improved aerodynamic stability tools, and the beta did a great job of implementing them. You now have indicators for both the center of mass and center of lift, which gives you a much better idea on the stability of the plane you're building. When used with the stability graph at different airspeeds, you can determine the overall pitch behavior of the aircraft without leaving the workshop to flight test it.

Here, you can see how the center of lift changes vectors at different airspeeds, along with how unstable the design is with the stability graph. The orange indicates that the plane wants to diverge from the direction of flight, which in this case is desirable since the X-02S Strike Wyvern is supposed to be highly maneuverable at lower speeds. 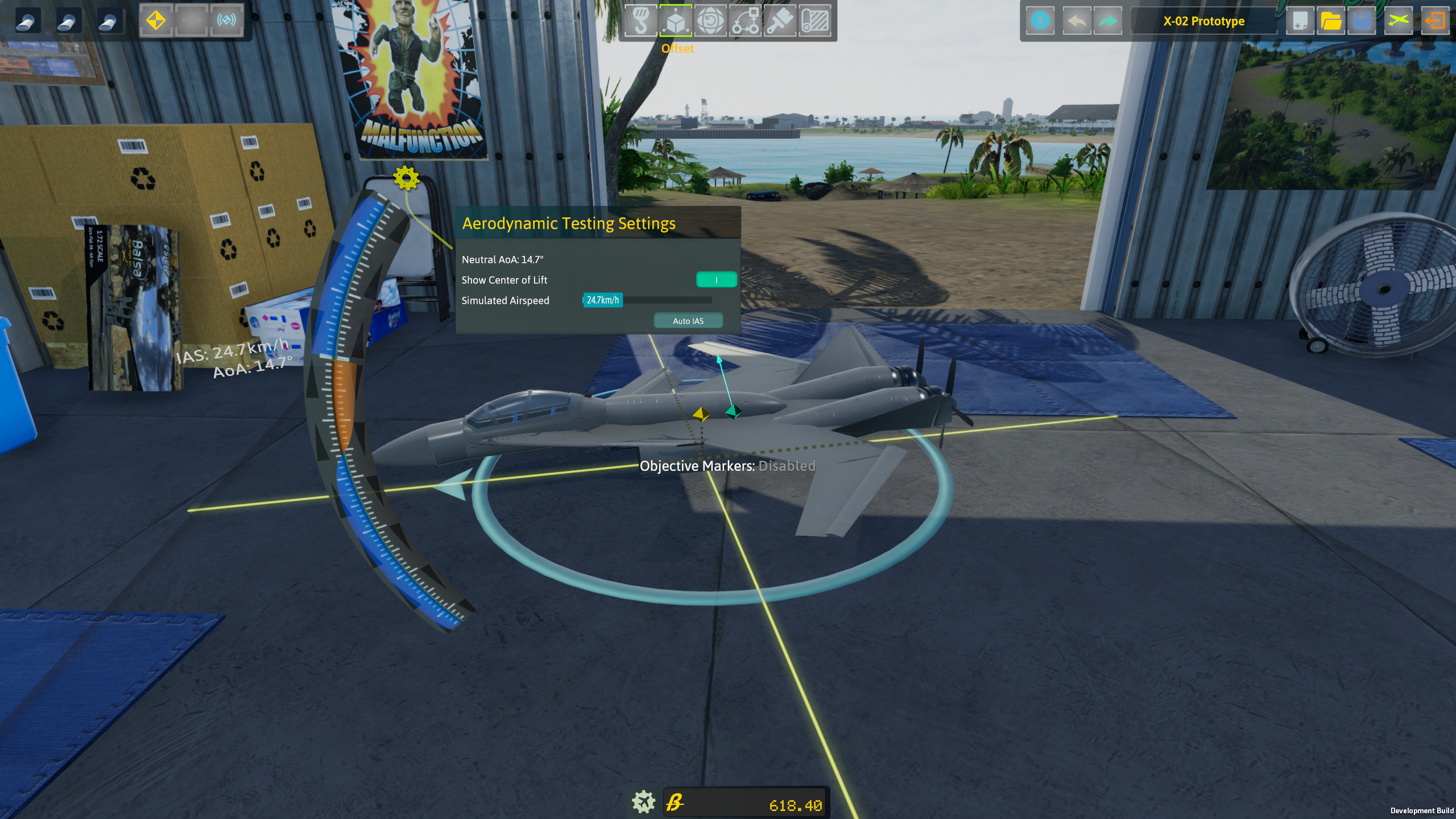 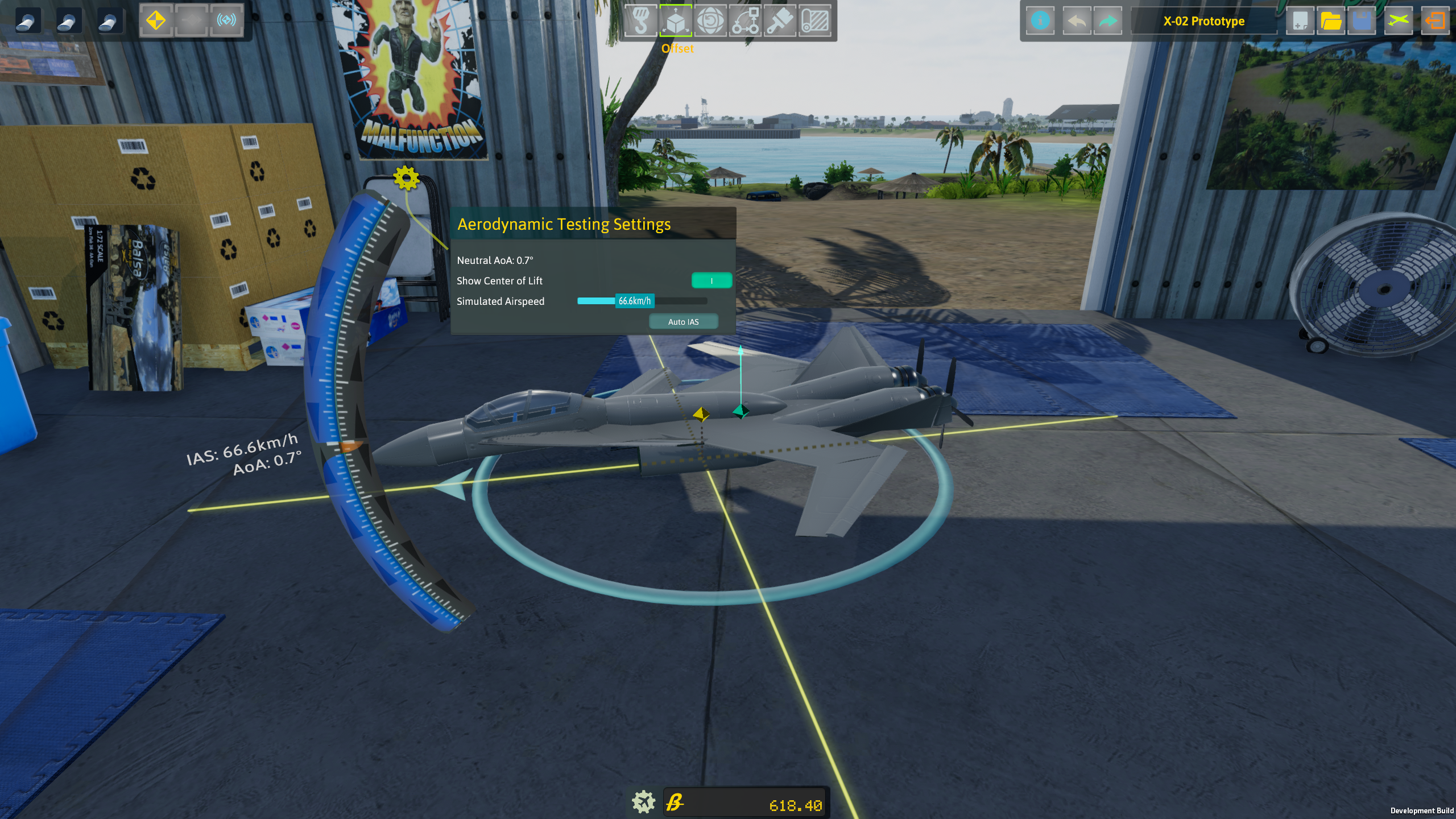 Along with all of these changes, the mass of certain parts seemed to have been reworked as well, since the position of the batteries affect the center of mass MUCH more than they did in the demo. Since batteries tend to be one of the more heavier items in an RC plane, I'm really glad they fixed this.

Speaking of batteries, the beta also added a "Connect" tool that visualizes and how the electrical/power components are hooked up and allows you to edit these connections.

This was also a nice addition since a major part of RC plane building is determining the optimal way to connect all of your components. Of course, it's much more complex in real life, with having to acquire the right connectors, using batteries with the correct voltage, etc. but it's still nice that there is a tool that emulates this. The workshop tool automatically connects the parts together, but you have the option of changing this if you desire. For example, my X-02S has the batteries and motors connected in serial, but I can choose to have one battery powering each motor separately.

After all of this tinkering, it would be nice if you could give your plane a fancy paint job...

The workshop now features a "Decals" tab, and at least in my testing, seems to let you add as many decals as you want. Combined with the "Paint" tab, you can create some really flashy liveries.

The classic shark mouth
Hmm, could use these as invasion stripes

There are numbers, letters, and various icons that you can rotate, scale, and change color however you see fit and lets your creativity run wild. The decals also don't seem to affect the cost of your airplane, so that's a nice feature. One thing I would like to see is some sort of text box editor, since at the moment you have to move and place each letter separately, and could get time consuming.

I wasn't too impressed with the flight model in the demo, and it doesn't seem to have changed much in this beta since I'm still seeing some stiff yaw and roll movements as well as some violent shaking on occasion. The X-02S I made isn't the most stable thing, I get that, but I don't think the plane should be moving like this when all I'm doing is pitching up at an angle:

Even in more stable aircraft, there is a weird wobbling going on, especially at higher speeds. I know the aerodynamic forces and physics on RC planes are vastly different than on full-scale aircraft, but it's not quite right yet. Really hope they adjust the flight model or physics of the game so things don't feel so shaky. It doesn't have to be perfect, but as long as the stiff yaw and roll reactions are fixed, I'll be happy. Other than that, the flight model is fine.

All in all, I had an really enjoyable time with the Balsa beta. The new additions like the career mode and workshop tools worked well for me and and made me excited for the full game. There are still some kinks in the flight model and physics that I would like to see fixed, and some other changes like replacing percentage sliders with actual measurements in the workshop, but I'm sure those will be addressed. I'm definitely excited to see how this game evolves!

If you're interested in this game and want to support it, I recommend wishlisting on Steam since it's supposed to be released as early access soon.

A History of Automatic Maneuver Systems from Project Aces

CEDEC 2019: Sharing What Kind of Story is Desired